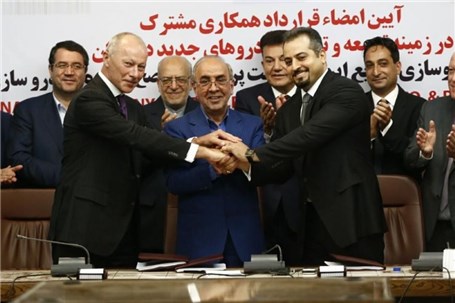 Asre Khodro:Renault has announced the official formation of its joint venture in Iran with local partner Parto Negin Naseh (Negin Holdings) and the Industrial Development & Renovation Organization of Iran (Idro).

Reporting "Asre Khodro"  The joint venture follows on from the strategic partnership agreement announced at the Paris Motor Show last September, but now also includes plans for an engine plant with capacity of 150,000 units a year.

According to the French carmaker, the new manufacturing facility will be in Saveh, 120km from Tehran. It will be owned and operated by the joint venture company.

The first vehicles to be produced at the plant will be the Symbol and the Duster.

The agreements also provide for the development of an exclusive Renault distribution network, in addition to the existing network of Negin Khodro.

Thierry Bollore, Renault’s chief competitive officer, said: “We are happy to sign this agreement with Idro and Parto Negin Naseh Co. In a rapidly expanding Iranian market, it was vital to implement plants, engineering and [a] purchasing centre. This joint venture will enable an acceleration of our growth in this country.”

Renault says its joint venture with historical partners Saipa and Iran Khodro will continue to produce the Tondar, Tondar pick-up, Sandero and Sandero Stepway vehicles. Those relationships were formed when Renault first entered the country in 2003.

At the start of 2016, following the lifting of economic sanctions against Iran,  carmakers PSA Peugeot-Citroën and Renault-Nissan, both of which already had a presence in the country, made joint venture announcements.

In October last year, PSA and Saipa also agreed to form a new joint venture to build and sell Citroën vehicles in Iran.

In reporting its recent half-year global sales results to the end of June, PSA said the start of production in Iran of the Peugeot 2008 SUV and its pre-sales marketing had been a huge success.

First-half sales of Peugeot vehicles in the Middle East and Africa region, which includes Iran, were up 332.9% at 248,398 units. The company said the figure included 207,900 cars produced in Iran during the period.

Last month, Volkswagen Group confirmed it would be making a return to the Iranian market after a 17-year hiatus, initially importing Passat and Tiguan models into the country.